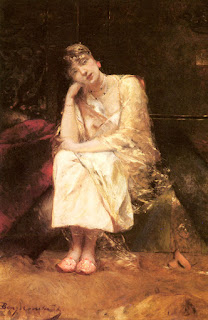 I've never been a contemplative.

Let me rephrase that. Before 2010, I wasn't a contemplative. Between 2010 and 2012 I found myself, not by choice, falling back-first toward the definition. Until then, I'd been a seat-of-the-pants person in nearly everything I've done. My whole life. Which is why my mother used to say (a lot!), "If I ever get you raised, I'm going to write a book." It wasn't unusual that my "not thinking" got me into trouble that my poor mother had to figure a way to deal with.

I have a memory of being sixteen. Being called into the school counselor's office. Being told I had enough credits, as a junior, to graduate high school and start something called The Senior Program, by which high school seniors left high school early to begin their higher education. While I could walk with my senior class the following early June, I would not actually receive my diploma (I received a blank piece of paper) until I had finished what I'd started.

...which is what launched my miserable nursing career. General Hospital. A lifetime career choice based on a soap opera. Seriously.

A few years later (too few), I met a man named John. He was cute. He was funny. He was single. So was I. I flirted (something I was very good at it those days) and he responded by asking me out on a date. And, the next thing I knew, to marry him. I'm not kidding when I say that I met him in September. By October I was engaged. By February I found myself crying, walking down the aisle. Crying because, while I hadn't given this engagement and subsequent marriage two seconds of thought, I knew instinctively I was making a huge mistake.

Thirteen months later--after what was probably the first time I'd ever even slightly thought anything through--I stood before a judge and asked him to dissolve the marriage.

I can think of only a few times when I've contemplated things. A few. But not many.

Let me explain why--and the explanation is simple: I move too fast.

And I think too fast. I wake up with thoughts whirling in my brain. All day long, thoughts. Memories. Future possible memories. Stories I've yet to write. The people I have created talking to me. Telling me what will happen in Chapter Twenty-one. Unless one of the other characters chimes in. In that case, what I thought was going to happen in Chapter Twenty-one happens in Twenty-two. When I sit down long enough to watch television or read a book, I constantly jump up to take care of this or that. Because, even when I'm totally lost in a show or a plot, part of my brain is still saying, "Don't forget to do this ... " These kinds of thoughts wake me during the night. My dreams are always vivid. Full of action. Talking. Words, words, words. To be a contemplative, I think, one must stop thinking with the brain and start thinking with the heart.

Oh, but those few times I have stopped ...

Like the night Linda Evans Shepherd and I went to see one of the last performances on Broadway of Les Miserables. For two hours, I was spellbound. Too caught up in the moment to think about anything but what was before me. And where I was at that very minute. In a ornate theater. On Broadway. In New York City! With a dear friend. Listening to the most amazing piece of artwork ever performed ...

Contemplation ... That was one. And there have been a few other times ...
Posted by Eva Marie Everson at 8:26 AM