Southern Sunday's (Where Are They Now?)

I don't like to go to the grocery store on Saturdays. So busy. I try to go, when I go, during the weekdays.

But yesterday, a Saturday, I had to make a run to Publix. A big run. A "filled shopping cart" run.

"Plastic okay?" the young girl who stood at the end of the checkout counter asked.

I told her it was ... I bought those reusable bags ... and I have managed to leave them in my car every single time I've ever gone into the store.

So the cashier scanned, the girl bagged, and I paid. "Which way to your car?" the girl asked. I pointed to the left. "That way," I answered.

As we walked out of the air-conditioning inside to the warming temperature outside, she asked if I was having a good day. I told her it had been a busy day so far. She told me she had come in at 11. I smiled and said, "That's nice ... you got to sleep in." She laughed lightly. "Yes, I did."

I told her I don't usually come to the grocery store on Saturday because it's so busy.

"Actually," she said, "Sunday is the busiest." 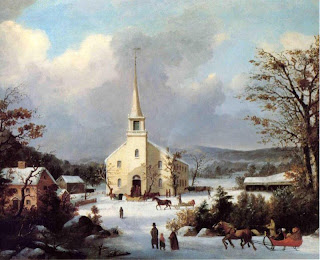 Sunday? Seriously? So I said that thing that dated me and made her look at me sideways. "I remember," I said, "When no stores were open on Sundays. None. People went to church, they came home, they had Sunday dinner, and then they hung out with family and friends."

"Seriously?" she asked.(Yes, it took us longer riding the dinosaurs to church and home, don't you know?)

"I remember," I said, driving the stake farther into my own heart, "when the drug store in my little community decided to open on Sunday. But only after 1:00. After church. And only the pharmacy, in case someone needed their prescriptions filled."

Ah, the Sunday's of my youth. We slept in later than if we were going to school but not as late as we had the morning before. Sunday school followed by church. Mother's fried chicken. Or pot roast. With potatoes. Or rice and gravy... Spending time with my family. Daddy being home! Spending afternoons on motorcycles or at the "creek" with friends (as I got older). Playing with the kids in the neighborhood (when I was younger). Then back to church for MYF (Methodist Youth Fellowship) and Sunday night service.

I miss the Sundays of my youth. I miss them ... badly.
Posted by Eva Marie Everson at 8:26 AM No comments:

The dogs woke me at their usual 5-something this morning. My typical response is, "Go back to sleep ..." which I say two or three times until I realize they are not the only ones who have to go ... outside. (Not that I go outside!) 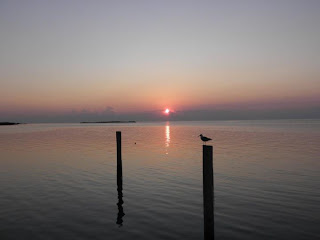 So I drag myself out of bed, stumble from room to room until I reach the back door, and then traipse across screened patio to open another door so the two littlest members of our family can do what nature calls them to so dang early in the day.

And while they do it, I stare outward, across the lawn, to the lake. This morning, it lay like glass ... an amazing shade of green. Birds fly over, their reflection is nearly perfect in the water below. The air was crisp. The sky a brilliant pink, a calming lavender, and a deep shade of gray--like Neapolitan ice cream. Or sherbet.

Over the course of the day, the sky grew bluer, the air grew warmer, and then became downright hot. Autumn in Florida. But then the sun set in a whole new array of colors--red, orange, and another shade of gray. I know because those same two dogs came and got me 12 hours from the first time today (with a number of times in between), requesting my services in opening the doors.

Again, I rested against the door frame of the screen door, looking out over the lake. This time the water was dark blue-gray. The surface, choppy. A man and a small child zip around on a Seadoo. Family & friends laugh under the canopied top of a pontoon. A few ducks glide in the water near our shoreline.

Interesting how the water and the sky changes, even within a few hours. Life is like that, too, wouldn't you say? You can wake up one morning and everything is fine. But before the sun sets, the "waters" are choppy. Same body of water. Same life. Smooth as glass. Choppy.