Keeping with the Scotty story, looks like good things are ahead for this godly young man!
Click on the link above for the story, the video, and a few photos.
Meanwhile, I'm working like a maniac on the last few chapters of a novel due in 48 hours
to my editor.
EGADS!
Watch these fingers fly! 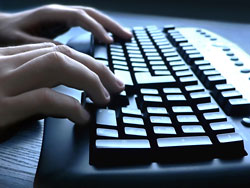 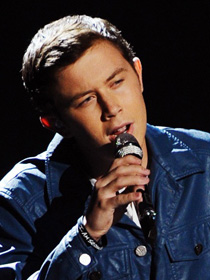 I admit it! It did my Southern-reared, country-lovin', Jesus-preachin' heart a whole lot of good last Wednesday night when Scotty McCreery was crowned America's newest American Idol. And when he gave God the glory ("I gotta thank the Lord; He's the one who got me here."), I could not have been more proud. My gracious, you would have thought I was somehow related to the boy!

Scotty, in spite of being only 17 years old, never wavered in his walk with God. There was one small moment at the beginning of the season when things nearly slipped out of his grip. Another contestant had been booted from a group and asked to be in Scotty's group during "group competition." The young lad, Jacee Badeaux, only 15 and somewhat shy and overweight, was told "get out." The hurt and rejection Jacee felt left Scotty equally as wounded.

The following night, without any prompting, Scotty asked for the judge's forgiveness as well as Jacee's. He said (and this is a paraphrase), "Whatever part I played in this, I'm sorry." He then broke down and cried.

It was so obviously heart-felt; the judges were moved and so was Jacee. Maybe no one more than me, however. I'm mean, seriously. This young man does more to exemplify Christ in that one moment than anyone I've seen in a while.

And, all the way to Number One, Scotty showed the world who was really Number One in his book, including by wearing a I Am Second wristband, visibly noted when he, as one of the top three, went back home for a hometown reunion.

So, I'm proud of you Scotty! From this Country-lovin', Jesus-preachin' Southern Belle to you, congrats!
Posted by Eva Marie Everson at 7:38 AM No comments: 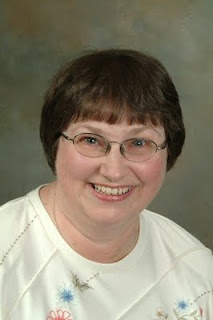 I am about as northern as you can get, having grown up and spent most of my life in Maine, but about a year ago, I moved to Kentucky. Before we even moved, I opened a post office box in my new town for writing correspondence.  I didn't think my accent was that bad (after all, it's these people around me who talk funny, right?), but I found out otherwise when I called my postmistress about a month after we moved in. Before asking my question, I thought the polite thing to do was identify myself, so I started out, "Hello, this is Susan Davis. I live on--" Her drawl interrupted me: "Ah know who you are, ma'am." I laugh every time I think about it, and I wonder if she tells people about that crazy writer woman from Maine with the accent.

For more information on Susan Page Davis, visit her website:
www.susanpagedavis.com
Posted by Eva Marie Everson at 10:36 AM 6 comments:

Let me tell you what is going on in my little world.

First, you have to know that my world is more than just the one spinning around me. My world also consists of people and places existing inside my  mind. Some folks would say "that makes her just a little crazy." Well, THAT is not what makes me a little crazy. Other things are responsible for that.

The difficult part is not the writing. I have already proven I can write 10,000 words in a 24 hour period. No. That's not what keeps me from reaching the goal in a day. It is what I'm writing about.

Life brings with it, baggage. We cannot reach our adulthoods without loads of it. Some of that which we carry is quite pretty. We have the suitcases plastered with stickers representing the towns, states, countries we have visited. Paris. Rome. Israel. Norway. South America. Africa. India. 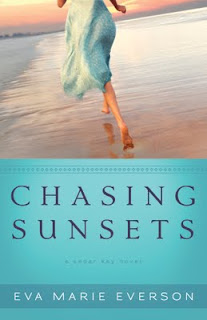 There are the trunks--cedar lined--holding our best. That which we can slip over our heads or dip our arms into and look quite dashing or elegant. Then there is the old Samsonite. It's seen better days. The locks are broken. There are gash marks here and there. Some scuffs. Maybe even a spring that sprang one too many times.

Characters have all that, too. If writers created and wrote about only people who have the cedar-lined trunks, you'd never buy our work. After all, readers like to know that "somebody" out there has it at least a little worse than they and manage to survive it. Rise above it. Conquer it.

Problem is, even we writers carry our own baggage. Sometimes, when we write out of our character's pain, we are writing out of our own. That makes it all the more difficult. Imagine creating a problem for your character six months before you write it only to find yourself in a very similar situation, unexpectedly, when the time comes to type out that part of the plot. It's difficult. But, as a writer, I get through it.

As a human, I will get through it too...because, with Christ, all things are possible. (Amen?)

Here are some places you can find out more:

This is from a VERY OLD book that someone gave me many years ago titled
The Modern Family Cook Book (dated 1953).
So you KNOW it has to be good, right?
Brown Betty 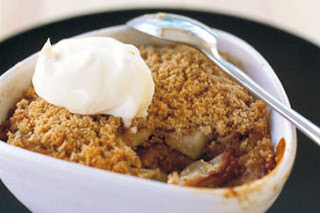 Put 1/3 of the crumbs into a buttered casserole and cover with half the apples. Mix the sugar, cinnamon, and salt together and sprinkle half the mixture over the apples. Add another layer of crumbs and another of apples and sprinkle with rest of sugar mixture. Top with crumbs, pour lemon juice and water over all and dot with butter. Cover and bake in a moderate oven (350 degrees) for 30 minutes, then uncover and bake 15 minutes longer. Serve hot or cold with or without cream. Makes five servings.
Posted by Eva Marie Everson at 4:46 PM 4 comments:

SOMETIMES WE NEED A LITTLE HUMOR WITH OUR COFFEE...
OR, IN MARK LOWREY'S CASE, AFTER NOON
GLASS OF COLD ICE TEA!
WATCH...AND PREPARE TO LAUGH OUT LOUD!
EVA MARIE
Posted by Eva Marie Everson at 6:04 AM No comments: 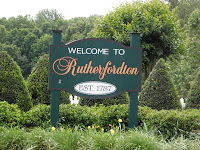 Can you believe it? After two weeks on the road and one week recuperating from travels, I. Am. Back!

And, boy, do I have the perfect story to share with you...concerning Southern places and people.

During my travels earlier this month, I spent several days in the most charming place on earth (as far as I'm concerned), Rutherfordton, North Carolina. Now, if you find that to be a mouthful, let me tell you that most people from around there just say "Ruff-ton." At least, I think that's what they are saying. 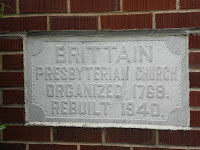 I love Ruff-ton. I want to live in Ruff-ton. My husband says he won't move...and I fear a long-distance marriage coming up (just kidding). Maybe, one day, I'll write that great American novel and we'll have enough money to be bi-lingual. We'll speak both Floridian and North Carolinian!

While there, my hostess, Sharon Decker -- who I love like the sister I wish I'd had and who (we believe) is my cousin as my father and her mother had the same surname -- happened to mention that she preached at a church for some time that had quite the history. Not only was Brittain Church established in the 1700s, its behind-the-church cemetery holds the graves of Revolutionary War soldiers, Civil War soldiers...and...slaves.

I had to see this for myself! A planned interview on Monday didn't pan out, so I asked Sharon to take me to this graveyard treasure trove. She said she would. 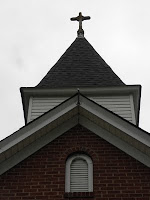 First thing I noted, he way the steeple of this church rose to the sky. Even though the church had been rebuilt over the years, it was if it stood in defiance of time, the seasons (a horrible storm had just blown through a few nights earlier), or any religious enemy. Yes, I still stand. We are a small congregation but we are what Christian faith is made of. As long as we are here, Christianity continues.

The second thing I noted was the sloping hillside where old stones, cracked and gray, dotted the landscape, much like the wildflowers growing among them. I couldn't wait to get back there, to turn on my camera and snap away! 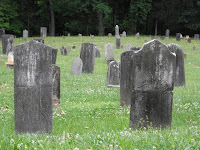 And so I met the woman who not only cleaned the church, she was also the choir director. She was being assisted by another woman who was also the organist.

You cannot make this kind of stuff up.

After formalities, I was led to the graveyard...more on that next week...'cause there were some very interesting graves out there...one in particular...
Posted by Eva Marie Everson at 9:37 AM 2 comments:

Until then, y'all be careful out there.

Eva Marie
Posted by Eva Marie Everson at 6:36 AM 1 comment:

On September 11, 2001, my husband and I were in Midtown NYC, getting ready
to film a segment of a national talk show.
I was ironing my husband's shirt while he showered. The television was
on...I watched Good Morning, America.
For a brief moment the lights flickered, then resumed.
Moments later, the image on the television screen changed.
As did our world.
That day, as we frantically tried to reach family members
to tell them we were okay, just 3 miles down the road
chaos was breaking out.
People were losing their lives.
Families were losing loved one.
Those who survived would never be the same.
That afternoon, when our cellphone service returned,
Dennis and I listened to 40 messages (our mailbox was full) from 33 different callers.
All were crying.
"Please be okay...please call me back..."
I remember how my father's voice held all the strength I needed to get through.
I remember how my mother cried when she heard me say, "Mother, I'm all right"
Just before she collapsed and was driven home from work
by her pastor who had come to make sure she was okay.
I remember not wanting to be separated from my children
but having no way to get to them.
I remember how I huddled in the bathroom during the thunderstorm that night
because I was afraid of the bombs I thought the thunder brought.
I feel personally vindicated by the death of Osama bid Laden.
As an individual. As a daughter. As a mother. As a sister
and as a friend.
Most especially as an American.
This Friday, I'll once again be in an airport.
I will do what I always do while traveling, I'll see men and women
dressed in uniform and I'll say, "Thank you."
But this time, I'll say it with a few more tears in my eyes
and a little more pride in my heart.
It took nearly ten years, boys and girls,
but we did it.
We did it.
We said we would and we did.
God bless the USA.
Posted by Eva Marie Everson at 11:54 AM 2 comments: