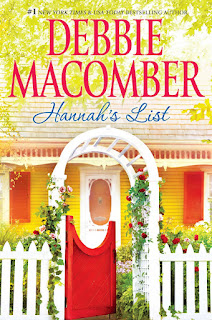 I'm reading Hannah's List by Debbie Macomber. It's been a few years since I've read anything by Ms. Macomber, and I'm wondering why.

The story is about a widower named Michael Everett. He's young. He's a pediatrician. He's a catch. Problem is, he is still head over heels in love with his wife, Hannah, who died of ovarian cancer a year earlier. On the one year anniversary, Hannah's brother Ritchie brings Michael a letter his sister had given him before her death, asking him to hand deliver it to Michael on the one year anniversary.

The letter asks Michael to remarry.

Hannah knows her husband well enough to realize he won't do this. He won't even date. Or look to date. So, she gives him a list of women to choose from. Not only does she offer this list, but she tells Michael why each one would be the perfect mate for him.

Michael now has to pursue the three women in an effort to honor his wife's dying wish. Of course this is going to require him to get on with his life ... and he's not sure he can.

I'm enjoying this book so far. It's perfect for a lazy day out by the lake, sitting under the ceiling fans in the screened patio, or lying on the sofa, fire crackling in the fireplace while the world outside is doused with rain showers. If I had a full day to myself (I'll tell you more about that next week), I'd head over to the beach, find myself a large umbrella where I could sit in the shade (no more skin cancer for me!), and finish the book while the waves crash upon the shore. You know, the basic Southern way of reading ...

What are you reading right now? Let me know and you'll be entered in this week's drawing. If you are so interested, tell me "I want to win Hannah's List" and, as soon as I'm done, it'll be on its way to your house!

Until next Thursday (when my secret will be revealed),