One of my all-time favorite people! Seriously... all-time...

They looked huge to me, those trestle tables under the picnic shelter behind the Baptist church. They also seemed a bit rickety, like they’d never hold all that food, that long array of fried chicken, green beans, potato salad, and gallons of ice tea. A dish of something dark red warned me where the congealed salads lay in wait, and at the far distant end . . . oh, what a gathering of pies! Coconut, chocolate, chess, pecan. 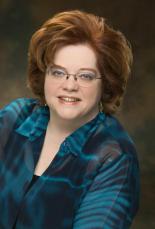 Mother would stand me on a somewhat shaky chair, hand me a dish towel, and say, “Keep the flies off.”
Pure torture for a hungry little girl, all of four, waiting for the rest of the food to emerge from cars and coolers. The scents of all that chicken made my stomach growl and my mouth water.
Welcome to dinner on the grounds, that beloved Southern tradition that brought kith and kin from near and far to their home church.
Tall oaks formed the leafy roof over our heads, which gave some, but not much, relief from the blistering heat of an summer. Sweat coated my face, and I whined until my mother dug a pair of shorts and a cotton shirt out of her bag and told me to go change.
I fled to the car and changed in the back seat, peeling off soaked crinolines and wriggling into the shorts and shirt. Then I scampered out to the cemetery, where the rest of the kids dashed around, hunting lizards in the sweltering heat. We squealed and ran among the family plots, occasionally stopping to pelt each other with marble chips scrounged from one of the graves. Reverent we were not. 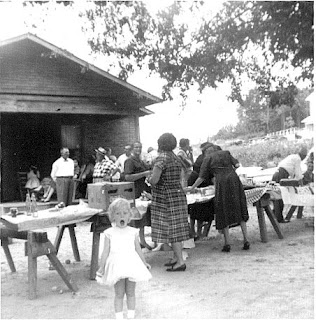 Then we heard the preacher call everyone to prayer. Time for the blessing. Everyone bowed their heads as he gave a full-blown Southern Baptist prayer.
For a kid, this takes about the same time as eternity. We squirmed, swatting flies and gnats, until one of the mothers cleared her throat in an ominous threat aimed at every person under 12. Didn’t matter whose mom – we all stilled.
Finally . . . . Glorious piles of unforgettable, delicious delicacies. Deviled eggs, which made me ask Mother how chickens could sin. Watermelon. Homemade ice cream.
Then came the tale-telling. Women gathered up the remains as the old men circled chairs and told stories about the past, about all those folks out there in the cemetery. Folks we should remember, whose trials and faith had blazed the trail we all walked.
When we finally left, I was sunburnt, sated, and full of dreams. And impatient for the next dinner on the grounds.


Bio: Ramona Richards, fiction editor for Abingdon Press, started making stuff up at three, writing it down at seven, and selling it at eighteen. She’s been annoying editors ever since, which is probably why she became one. She’s edited more than 350 publications, including novels, CD-ROMs, magazines, non-fiction, children’s books, Bibles, and study guides. Ramona has worked with such publishers as Thomas Nelson, Barbour, Howard, Harlequin, Ideals, and many others. The author of eight books and an avid live music fan, Ramona loves living in the ongoing street party that is .


(Black and white photo of young Ramona, singing at a Dinner on the Grounds."

Posted by Eva Marie Everson at 7:36 AM