Monday's Musing on All Things Southern 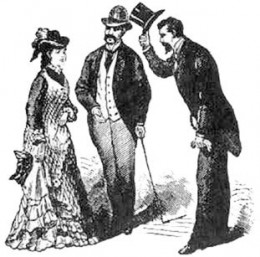 Here's a line you'll hear in the South: Your mama done raised you right.

I've been traveling a lot lately. In one airport, out one plane. Back in another. Rolling my clothes so everything will fit in my luggage. Filing through TSA lines like cattle to the slaughter. Sleeping with my head against tiny windows above the clouds. Listening to children crying and giggling and adults chatting and hacking and all of us in quarters too small.

I was in O'Hare yesterday. Lots and lots of people in O'Hare. Coming and going. I watched them for six straight hours. I walked pretty much all over the airport in that period of time and here's what I noticed: there are too few gallant men out there these days.

Example: I'm walking up to the tram at the same time as this man. He's not young-young. But he is younger than me. I'm assuming he'll step back and allow me to get on first.

Wrong. Like there wasn't going to be enough room on the thing!

Now, if this were the only example of this kind of rude behavior, I wouldn't bother to mention it. But, it's not. It's seriously becoming an epidemic.

Their mamas didn't raise them right!
Posted by Eva Marie Everson at 9:40 PM