A Client and a Church

The woman introduced herself as Sue, but told me little about herself. She was all about her husband, Dan. He'd lived in Israel, she told me, as an NBC videoographer. Naturally, my ears perked. In his years working for NBC, he'd hobnobbed with the rich and famous and had some rather funny tales to tell.

"He's a storyteller, but he needs a good editor," she said. "Are you also an editor?"

I told her I was, that I had an editing business, which had become part of my writing life. She grabbed one of the bookmarks I'd just given to the clerk, asked me to write my name and email address on it, and said, "You'll hear from me!"

She wasn't kidding. I had an email before I even got home. Sue and Dan, who calls himself Danny, asked to meet me for lunch in Winter Park the following week. I agreed.

Dan "Danny" Beckmann wasn't anything like I expected. He's Robin Williams on speed. Funny. Articulate. Filled with stories that either leave your mouth wide open or your eyes squeezed shut from laughing so hard. Next to his lovely wife, Sue, who is lovely and poised, he's the pepper to her salt. 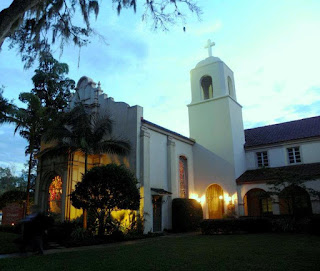 I took the project (and have loved every minute of it)!

A few weeks later I received a call from Sue telling me about a church service she and Dan attend once a month in Winter Park known as "Wellspring." Something about it sounded familiar, but not enough to make me say, "Oh, yeah! I've heard of it." Wellspring, founded by Jan Richardson, meets once a month in a Methodist church's chapel on Interlachen, she said, and she'd love it if I'd meet her for dinner on Park Avenue (one of Winter Park's most sought-after brick-laid streets). Afterward, we could go the the service together.

I was standing at the corner of Anguish and Relief. Ready to turn. Left or right, it really wouldn't matter. I was about to step onto and into another part of my journey ...
Posted by Eva Marie Everson at 9:04 AM