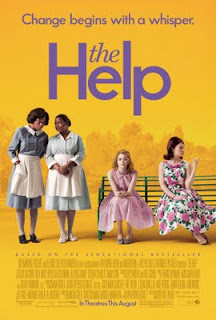 I'm reading THE HELP (now a major motion picture) right now. Loving every minute of it. Amazed this is Kathryn Stockett's first novel, however, according to her bio, she worked in magazine publishing and marketing for nearly a decade. And, she lived in New York City, so I'm sure she absorbed some of the artistic culture one can only obtain there.

That said, this woman knows the South. And she knows what life was all about in the 60s for white families as well as for black.

I flipped to the back of the book to read her acknowledgments (as any good author would do) and noticed that her family, like so many of our families, had the "maid." Or, "the help."

Our maid's name was Etta Mae. Oh, gosh...I loved that woman! She was good and kind. So loving. Loyal. Looking back on it, for Mother to have entrusted the care of my brother and me to any woman while she "ran her errands" means the woman had to have had godly virtues and values.

I have two very distinct memories concerning Etta Mae. The first concerns the day she didn't come to work but sent someone in her place (she was sick, if I remember correctly). Mother was out "running her errands" when the mail came. Among the letters and such was a box, the perfect size for the doll I'd ordered off the back of a cereal box. I was beside myself to open that box! But the substitute help would have nothing to do with that until Mother got home.

I demanded (!!!) she allow me to open the box. I told her very plainly what was in it. But she held her ground.

When Mother came home, I ran past the substitute and said, "So-and-so won't let me open my box!"

Mother looked at the package, realized what it was and said, of course, I could open the box. I spun on my little five-year-old heels toward the woman who wasn't nearly as nice as Etta Mae, placed my hands on my hips, jutted my chin forward and said, "See! I told you I could open it!"

Mother immediately put the box away and made me wait another 24 hours.

Mother did not believe any child should talk to any adult with disrespect. No matter what.

The second memory involves the day Etta Mae's husband couldn't come get her from the house. By this time, I was probably seven years old or so. Etta Mae was in the midst of fretting when Mother told her "it's okay, Etta Mae. I'll drive you home."

"Do we get to go too?" I asked, speaking of my brother and me.

Mother said of course we did; she couldn't very well leave us at home alone.

I was thrilled! I was going to get to see where Etta Mae lived! We piled into the car. Mother in the front driver's seat, Etta Mae in the middle of my brother and me in the back. With my face pressed against the glass, I said, "Etta Mae, do you live far from us?"

I continued peering out the window, watching the landscape change from the sprawling ranch-style homes of the new families in town, to the massive Victorians of the "old money" along Main Street. And then, to small houses, many unpainted. Lots of dark-skinned, barefoot children running around in sandy, grassless front yards. Furniture meant for living rooms and dens stretched across narrow front porches. Front doors were wide open; I could see straight through what I now know are shot-gun houses.

I felt panic rising. "Etta Mae," I said, fearful this was actually where she lived. Not wanting my beloved Etta Mae subjected to such poverty. "Is your house pretty like our house?"

Etta Mae chuckled. "Oh, no chile...my house is not pretty like anybody's."

About that time, Mother--all pink-faced--turned into a driveway. A pack of children ran toward the car, frightening me all the more. My brother wanted to get out and play; I wanted to adopt Etta Mae, take her home and make my bedroom her bedroom. I could move in with Van.

"Them's my young 'uns," she said. She opened the door on my side, scooted over me, said, "Thank you, Miss Purvis," and got out.

I cried all the way home.

Make that three memories...Years later, I was a nursing student. My family and I had just sat down to supper when the phone rang. It was a friend of mine, an elderly doctor who had been my muse. He was about to perform an autopsy and, knowing I was struggling with Anatomy & Physiology, asked if I'd like to join him. He'd be more than happy to show me each part of the human body, how it works with all the other parts.

I jumped from the table, brushed my teeth, and out the door I went. Hours later, I returned, totally amazed by what I'd seen. The face of my  mother, however, looked grim.

Daddy was with the GBI (Georgia Bureau of Investigation). He'd gotten a call while I was gone and had left to work a new case. Murder. Gunshot. 22-year-old black male. The same man I'd just seen sliced opened and used as a teaching tool. Then my mother said, "He was Etta Mae's son."

One of those little children I'd been frightened by ten or eleven years earlier had been my first autopsy viewing. My heart hurt now. No longer was he an gunshot victim who died, he was Etta Mae's son (Etta Mae had long retired from "helping" the white women by this point).

Years later I asked Mother why she had "help" at all back when we were children. She didn't work outside the home, after all. I said to her, "I have a full-time job, work myself silly with church functions and school functions, have a house the same size as yours, and I don't have a maid!"

Mother replied, "That's just the way things were done back then."

Well, I reckon so.
Posted by Eva Marie Everson at 8:41 AM