I don't know what got into me exactly, but Saturday I woke up with a "hankerin'" for homemade pound cake. Maybe it's all those miles I've put on the treadmill lately. Why not balance the exercise and calorie-burning with some high-calorie Southern-style dessert.

If you are from the South, you already know that pound cake is practically a staple down here. If you aren't, you should know it. My mother made some of the best and, I'll be honest, my mother-in-law was the Queen of Pound Cake, hands down.

I hadn't made a cake in so long (from scratch), I no longer had the pan. I also didn't have 75% of the ingredients I would need. A trip to the grocery store was necessary. But first, I went through old recipe books, found the recipe I used...oh...probably 15 years ago (for the last time), and wrote down the ingredients. Off to the store I went.

Okay, I'm going to admit it...I was a little stumped on the sour cream. The recipe called for a pint. But sour cream comes in ounces, for pity's sake. A year and a half ago, this would not have been a problem. I would have called my mother. But since she is busy whipping up pound cake in heaven, I did the next best thing. I looked around for an "older" woman in the dairy department who may be able to help me. God love her, there was one standing right there.

I didn't get her name but she told me 1) she started learning how to bake when she was five and was "fluent in kitchen" by the time she went off to the first grade; 2) a half-pint was 8 ounces; and 3) did I know where the pre-made cookie dough was. (For some reason, she thought I might know. As it turned out, we were standing right next to it.)

So I bought the ingredients and home I went. I even had to buy the pan to bake the cake in. I posted on Facebook what I was about to do and the requests came pouring in for the recipe. So, good people of Facebook, fine people of the South, and all y'all who want to know about the best thing to ever go with a glass of cold milk...here it is: 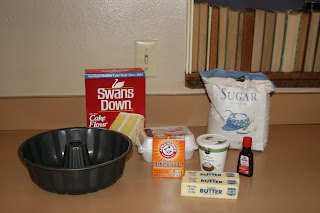 Add eggs, one at a time

Sift flour with baking soda; add to above mixture. 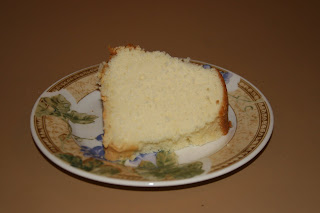 Allow to cool, Topsy-turvy...serve and enjoy!
A cold glass of milk is a great addition to this cake...or, for breakfast, a cup of coffee.
Posted by Eva Marie Everson at 5:30 PM