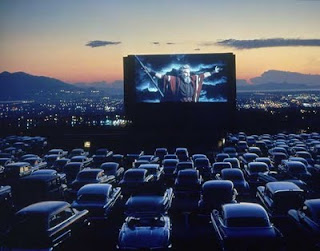 
You will after you read this:

A Night at the Movies—Southern Style
Dorothy Love
Driving through the mission district in last weekend provided a chance for celebration and sadness. Celebration: a new public library, the Mission Reach branch had just opened and the parking lot was nearly full. A very good sign in a city in which a quarter of residents are illiterate.  But then, just a few blocks away, sadness. One of the last drive- in movie theaters in these parts is being torn down.
When I was girl growing up in a small Southern town, the drive- in was the place to be on hot summer nights. For a couple of dollars a family of five could  park in front of a giant screen, hook a speaker over the lowered car window glass and watch a double feature while sipping Cokes, and eating popcorn and Eskimo Pies.  Pure bliss!
During the mid 50’s, we saw everything from classics such as Twelve Angry Men, The Old Man and the Sea, Gunfight at the Ok Corral, Bridge on the River Kwai, and The Big Country to the improbable and supremely silly: Attack of the 50 Foot Woman, Teenage Monster, Queen of Outer Space, Rockabye Baby, No Time for Sergeants. Anyone remember seeing a movie called The Blob?

Of course I was intensely interested in the trailers for the movies my parents forbade me to see: , The Long Hot Summer, Cat on a Hot Tin Roof. Mild by today’s standards but very racy for the 50’s.
As I got a older, going to the drive- in was as much about seeing and being seen as it was about the movie. The drive- in was one of the few places in our tiny town where my friends and I could sit and talk and flirt with boys  and still have our parents keeping watch from the front seat of the Ford parked in the third row.  Even now, the smell of popcorn brings me back to those heady days.

The drive- in originated in in the early 1930s. By 1950, almost four thousand of them dotted the landscape. But by 2003, the Boston Globe reported the number at 432. Undoubtedly there are even fewer now. Sure, it’s more comfortable to sit in an air-conditioned multiplex sipping on a ten dollar Coke, but I still miss those languid summer nights at the drive in, when the smell of popcorn, and young love, was in the air.
Want to know more about Dorothy Love? Click here: Southern History with Heart
Add your comments! What is your favorite (and keep it clean!) Drive-in memory?
Posted by Eva Marie Everson at 8:54 AM

Email ThisBlogThis!Share to TwitterShare to FacebookShare to Pinterest
Labels: Beyond all Measure, Dorothy Love, drive-in movies, Eva Marie Everson, Growing up Southern, Life in the 50s, Life in the 60s