This morning about ten-ish, my dogs wanted to go outside and frolic a while in the back yard. We have a large lawn; it slopes from the back of the house to a lake with a small beach front. Facing the lake and to my left is a cluster of pine trees that has become the roosting location for a family of bald eagles. Mother Eagle. Daddy Eagle and Master Eaglette. Not sure how old the eaglette is ...but he is sprouting a fuzzy white head, so he must be getting around three years old.

As my dogs ran around in the sunshine (that was growing hotter by the minute), I looked toward the trees and saw the eaglette. At the same time, he started singing his song (it really sounds more like a shriek, which is how I sing...). I stepped back inside, grabbed my camera, and returned to the yard.

On my way to the best place for taking the shots, I noticed the feather from a blue jay and the downy feather from a duck. I picked them both up, put them in my pocket, took the photographs, then called to "my girls," telling them it was time to go inside. It was just so hot!

Later today I taped the feathers onto the page of my journal. On the next page, I wrote: 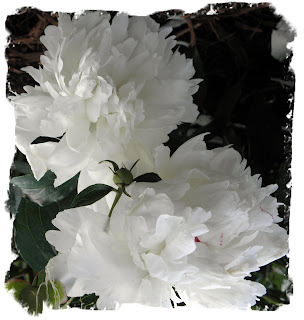 I picked up the feathers because they remind me that we all leave evidence of having been here. Fingerprints that say we existed...


Last night I received a Facebook chat from a woman named Jeanne. She wrote, "I know your mother has been gone a year now and I just wanted you to know I think of you and of her often."


I didn't recognize the name so I asked, "You knew my mother?"

She wrote back, "Yes. On the night before she collapsed at the Blue Ridge conference last year, you and she were about to go for a walk and she invited me along. We talked about the cross on the hill."


I wrote: You showed us the peonies!


I have often wondered who the woman was my mother had invited to join us that evening. Had it not been for  Mother's friendly and inclusive nature, we would not have had the moments we had amongst a garden of just beautiful flowers. Jeanne knew them by name and talked to us about them. We took several pictures before we headed back to Mountain Laurel, where out rooms were.

Jeanne added last night, "Your mother was so kind to invite me. It told me so much about the kind of woman she was."

They identify us, don't they?
Posted by Eva Marie Everson at 3:14 PM