[I've taken a few weeks off from telling our story for a variety of reasons, the biggest one being that I traveled to three states in one month.]

To fully understand our story, one must first understand the dynamics of various mental health issues. I've already talked about BD, or bipolar disorder. (Bipolar disorder, sometimes referred to as manic-depressive disorder, is characterized by dramatic shifts in mood, energy, and activity levels that affect a person’s ability to carry out day-to-day tasks. These shifts in mood and energy levels are more severe than the normal ups and downs that are experienced by everyone.*) 5.7 million Americans lives with BD. Quadruple that for an idea of how many loved ones are affected. My husband and I are two of them.


Now I want to share just a little with you about Borderline Personality Disorder (BPD).


Years ago, a friend of mine--a psychologist--said to me, "BPD is the most complex, and the most difficult to treat of all the personality disorders."


Children are not diagnosed with BPD, however they can be diagnosed with emerging BPD. In other words, "Legally, I cannot put this under diagnosis, but ... dollars to donuts, here's what we're looking at."


Before I talk further about our own story with BPD, I want to share another nugget of information from PsychCentral's website (http://psychcentral.com/).


Take a minute, please, and read: 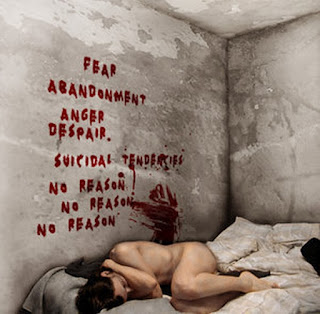 The perception of impending separation or rejection, or the loss of external structure, can lead to profound changes in self-image, emotion, thinking and behavior. Someone with borderline personality disorder will be very sensitive to things happening around them in their environment. They experience intense abandonment fears and inappropriate anger, even when faced with a realistic separation or when there are unavoidable changes in plans. For instance, becoming very angry with someone for being a few minutes late or having to cancel a lunch date. People with borderline personality disorder may believe that this abandonment implies that they are “bad.” These abandonment fears are related to an intolerance of being alone and a need to have other people with them. Their frantic efforts to avoid abandonment may include impulsive actions such as self-mutilating or suicidal behaviors.

Unstable and intense relationships.
People with borderline personality disorder may idealize potential caregivers or lovers at the first or second meeting, demand to spend a lot of time together, and share the most intimate details early in a relationship. However, they may switch quickly from idealizing other people to devaluing them, feeling that the other person does not care enough, does not give enough, is not “there” enough. These individuals can empathize with and nurture other people, but only with the expectation that the other person will “be there” in return to meet their own needs on demand. These individuals are prone to sudden and dramatic shifts in their view of others, who may alternately be seen as beneficient supports or as cruelly punitive. Such shifts other reflect disillusionment with a caregiver whose nurturing qualities had been idealized or whose rejection or abandonment is expected.
~~~~~~
Caregivers. Or adopted parents. Or those with permanent (the most ridiculous word I've ever typed in connected with this issue) guardianship.


If you have read these words above, then I would venture to say you now know more than those who work for DCF (Department of Children and Families--another ridiculous word) and especially those of CBC of Central Florida.


And I am left to wonder: what may have happened had they taken a minute to fully understand mental health issues? Because these who are so diagnosed, and especially these children, are by no means guilty of any crime. They are not demons. They are not "crazy."


But neither are the caregivers, parents, and guardians.


Yet, we have become the victims.


*Taken from:  http://www.nimh.nih.gov/statistics/1BIPOLAR_ADULT.shtml
** Taken from: http://psychcentral.com/lib/2007/symptoms-of-borderline-personality-disorder/
Posted by Eva Marie Everson at 10:09 AM