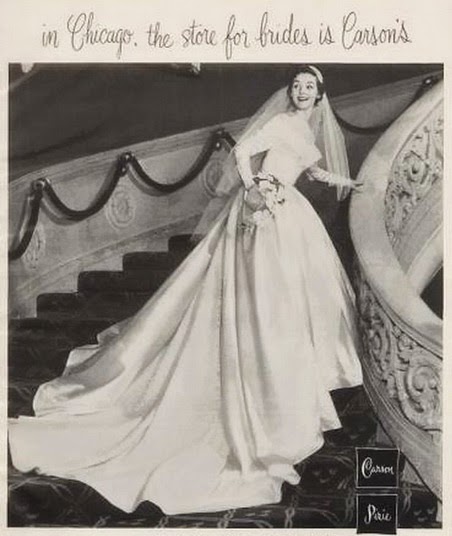 So here's the story.
Back around June 30, I had two and a half months to re-write approximately 95,000 of my upcoming novel, currently titled Five Brides.
Five Brides is based on the true story of five women who met in Chicago after World War II. They became roommates for "a season" and during that short period of time they each put $60 in the "pot" and bought a beautiful wedding dress from the iconic Carson, Pirie, Scott and Company.

Each woman wore the dress on her wedding day.

I have had the joy and privilege of meeting one of those women. Joan is now in her early 80s and a woman of great influence. As far as we know, she is the only living member of the five. Because most of the women were only roommates and not friends, there is no story on the other four.

Which means, this writer gets to make it all up.

So, where am I right now in this re-write?

My characters are: Joan (from England), Evelyn (from Georgia), Betty (from Illinois), and Magda and Inga (sisters from Minnesota). As of yesterday, Betty is about to right a wrong, Magda is about to make a positive decision, and Inga is heading head-first into a very, very bad decision. And Joan? Well, Joan has a new job which will, in time, impact Betty. Greatly.

For the next couple of weeks or so, I'm going to post my progress. Some of the sites I visit (after all, I wasn't even alive in 1952!) and some of the songs that inspire me.

Let's have some fun at my expense, shall we?
Posted by Eva Marie Everson at 1:59 PM