At 6 30 on Friday morning, three other women and I met in my driveway. The air was cool but humid. The sky was still dark but growing lighter. Insects swarmed around the lamppost in my front yard. We loaded up Debby H's Saturn Outlook to the absolute brim, climbed in, and headed out the driveway. Goodbye house, humidity, and insects.

Together, as the sky grew increasingly lighter and our coffee kicked in, we--Debby H, Debbie B, and Patsy B--started to chat a little, discovering how alike we are in our differences. Debby H has a husband and two teenage boys. Debbie B is experiencing empty nest for the first time, now that all five of her kids are out of the house. Patsy B has been a widow for 11 years; she loved her husband dearly and misses him like mad, even after all this time. And then there was me. 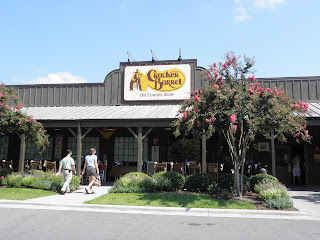 Florida became Georgia. The sun was now gleaming over the marshes along the coastline as we sped up I-95. We had already made I don't know how many stops--potty breaks and grabbing a little something to eat or drink. Our conversation was opening up along with the day. Debby H, who was the Driver # 1, and I had switched places;I was now behind the wheel of the luxury suburban.

We got to Savannah and decided we were hungry. It wasn't quite lunch, but we had all agreed on Cracker Barrel, of which there are a ga-billion along Southern highways. I ordered chicken and dumplin's, as always. Turnips. Fried okra. Patsy said she had never had okra fried so I remedied that. She and I both agreed, better fried than boiled. Yuck. 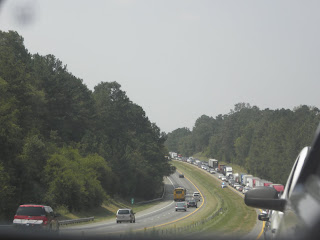 Georgia soon became South Carolina. We drove about halfway up, cut across toward North Carolina, and then entered the incredible Great Smoky Mountains. Majesty rose on both sides of the highway. We oo-ed and ah-ed. Our conversation continued to grow with the same intensity of the landscape. Four women in one vehicle cannot be quiet long.

We grew quiet at the sight of a pretty serious accident involving a car and an 18 wheeler. Traffic backed up like crazy.

We had to make, ah-yet, another potty break. This was our fiftieth of the day (or so it seemed) and we had gotten badly lost at one point. Okay, two points. Not really lost...we just couldn't figure out how to get to where we wanted to go. I don't think that really counts as lost.

So...we needed gas and restrooms. We got off the interstate, and drove up the driveway of a gas station/convenience store. And I do mean drove "up." We were taking turns putting gas in the car; it was Patsy's turn. But there were a lot of bikers milling around the pumps, not pumping gas and not really moving out of the way either. Debby H got all gutsy, rolled down the window and basically told a burly biker to "move it."

We went inside for the potty break but, alas, their well was broken. Interesting. So we got gas and drove across the street to another convenience store, whose well was not broken, to use the restrooms, then felt all guilty that this was our only reason for being there. So we bought stuff. Junk nibbles. We got back on the highway.

Our conversation soon turned silly...and I do mean silly.

We turned on the music to XM radio. For a while, we grooved to the 70s, then the 60s, then the 50s. At one point, Debby H--who doesn't know the words to too many songs but can figure out the chorus after she hears it a time or two--got her groove on...and I got out my camera. (see video)

We came to a tunnel. Debby H said, "Everybody scream!" And we did that too... (see video) although I admit I couldn't hold my scream for laughing so hard.

By the time we arrived in Gatlinburg, TN (we were attending Cheri Cowell's marketing retreat in her lovely mountain cabin), we were positively loopy. In awe of our surroundings, but loopy.

But wouldn't you be if you had been in a car with four women from all walks of life for nearly 13 hours?
Posted by Eva Marie Everson at 1:54 PM