Typically, Bipolar Disorder does not rear it's head until a person is in his/her early twenties. But that doesn't mean teenagers are not affected by it. Don't have it. They can and they do. And when they do, the change in moods, the extreme highs and desperate lows, are more frequent. Some teens with bipolar disorder can "cycle" in an hour, though most cycles can be seen within a day or a week.

Now, anyone who has ever reared a child from infancy to adulthood knows that teens are already moody, thanks in part to shifting hormones. But teens with bipolar disorder are even more moody. Hard to imagine, I know. But it's true. 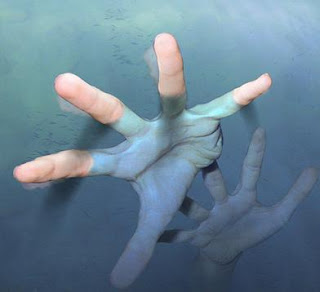 Teens with bipolar disorder will be overly happy. Act silly (like a younger child). Or, they can have a short temper. Have trouble sleeping but not feel tired. Or, they sleep too much and they're still tired. They are often unable to stay focused on one thing for any period of time. They talk really fast but don't stay on subject. Or on task. And, they are more likely to over-focus on sex. Talk about sex. Have sex. And, because they are also apt to do risky things, the likelihood of them doing something sexual and stupid are great.

These children are not just "depressed" ... they are sad. They have stomachaches. Headaches. Their may talk about feelings of guilt. Worthlessness. They overeat. Or, they don't eat enough. They lose all interest in the activities they once loved and/or excelled in.

They think about death and suicide. A lot.

I remember the day I found a drawing Jordynn left behind. Done in black pencil, it showed a dead tree, a dark moon, and a headstone with her name under which she'd written: Death by Suicide.

I thought of the day she and I visited my mother's grave. Jordynn, who had an amazing gift for photography, was taking photos of some of the more interesting headstones, statues, and floral arrangements. I noticed that she'd become fixated on one and, after she had walked away, I ambled over. It was the grave of a young girl, just a little older than herself, who had committed suicide. Why the family thought it necessary to share this, I don't know ... but they did and, for reasons I didn't understand yet, my child was drawn to it. When I found her etching, I felt sick to my stomach. Even more interesting to me was that she had always been adamant that we call her by our last name, but in the picture she used her birth name.

I had a chance to share the drawing with her doctor, but it was long after the fact. Long after the State of Florida and CBC of Central Florida had stepped in and taken her out of our home. Out of our care. Long into the downward spiral of insanity that wrapped itself around our lives. At least for a while.

Bipolar teens can be helped. With therapy and medication. The National Institute of Mental Health, in one of their brochures, talks about the importance of doctors working with family members to help the child through this difficult time. So what do you do, then, when people who know nothing about such an illness presume to remove the child so that you cannot work with the doctors. You cannot help your child.

What do you do when you are forced to watch your child drown and those who are supposed to protect look at you dumbfounded and say, "What water?"
Posted by Eva Marie Everson at 3:56 PM