I went to the Altamonte Mall on Saturday to meet with a friend. I hadn't seen her in four years; she's added a whole new person to her family since then and moved to a new home. 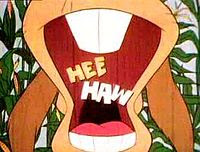 After catching up, we went our separate ways. I went first to The Happy Cow Company (to purchase something for my upcoming grandson) and then to Macy's. They were having a sale. I cannot resist at least looking at sales racks. (And, for anyone interested, I bought a shirt that was regularly $25 for $3. Amazing find!)

Anyway, I was meandering in the Ralph Lauren section where a small monitor played old country greats (with video) near the dressing room, I suppose for those waiting on customers inside the tiny cubicles with lying mirrors. I smiled as Johnny Cash sang, "My name is Sue! How do you DO?" followed by the familiar, "Hello, Darlin'..." I actually sang out loud, "It's been a long tiiiiime...."

My memory rushed back to Saturday evenings. 7:00 to 8:00 we watched The Lawrence Welk Show. "And a one and a two ..." As a dancer, I was inspired by Bobby and Barbara, hoping one day I could dance alongside them. (Okay, the truth is, in time, what I wanted was to be a backup dancer for Tom Jones ... but then he stopped his show and that dream went with the cancellation.)

Then came 8:00. And ... Hee Haw. Now, why I remained in the family room with Mother, Daddy, and Brother is anyone's guess. That first hour was bad enough. But the second ... Still, I have to be honest. I loved to watch Roy Clark play the git-fiddle (as we called it), and there was something pretty smooth about Buck Owen's voice (who, incidentally, followed Conway Twitty on the Macy's monitor). Not to mention, in those days, we just liked being with our family around the entertainment box! Or, as Mother called it, "The One-Eyed Monster!"

I moved away from the Macy's monitor to another section of the store with the words, "Hey, Grandpa! What's for supper?" bouncing around in my brain.

Which kinda left me wondering ... do you remember Hee Haw? If so, what was one of your favorite moments?
Posted by Eva Marie Everson at 9:42 AM