A little over 10 years ago I was blessed to make the acquaintance (which blossomed into a friendship) of Miriam Feinberg Vamosh. At that time she was the guide (and interpreter) to a small band of journalists visiting Israel, most of us for the first time. Our group being so small (less than 10 including Miriam, the IMOT representative Dana, and one crazy driver) gave us all the opportunity to bond.

Five years later I returned to Israel to travel through Israel with Miriam, just the two of us, for a book project she and I were contracted with Thomas Nelson to write. Reflections of God's Holy Land; A Personal Journey Through Israel went on to win awards, but more importantly, it drew two hearts to beat as one. 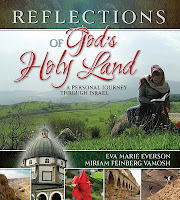 I returned to Israel in 2009 with another small group of journalists for one of the most satisfying trips to anywhere I've ever taken. During that time, Miriam and I talked further about a book project of hers, a novel based on a scroll discovered from the time of the Masada tragedy (73 AD). One of the journalists on that particular tour was writer/speaker Cheri Cowell. Cheri's work also includes an e-book conversion service.

Two years + since, Miriam finished her project,contacted Cheri, and decided to e-publish the book.

I'm excited to tell you about The Scroll because it brings history to life. This may be a part of history you are unfamiliar with (just as someone from another country might say, "What's Antietam?") For Jews it is obviously important, but also for Christians because it helps explain so much as to what happened to God's chosen after the earthly life of Jesus and what was happening when some of the New Testament letters were being written.

Beyond that, of course, is the entertainment factor. If you love history, archaeology, and a good read, allow me to encourage you to check out The Scroll by Miriam Feinberg Vamosh. Let me know what you think!

(And, if you are interested in e-publishing, contact Cheri Cowell via her webpage. You'll learn much more about Cheri, her ministry, and her marvelous new book, which I'll talk about soon ... as I get my copy ... hint hint. :) )
Posted by Eva Marie Everson at 8:18 AM